In the Soviet Union millions of posters were produced by the government from 1917 to 1991. Both the publisher and the printer were critical to a poster's production and its output. Printers often used a symbol (called a chop) to distinguish where the poster was printed. Publishers, typically State-owned in the Soviet Union, frequently included their company name on each poster. Below is collection of Soviet publishing and printing marks taken from selected posters in the Poster Plakat Collection. These marks and their organizational histories offer a unique insight into poster production in the Soviet Union.

Prior to Bolshevik nationalization of the printing and publishing industries in Imperial Russia, Red Army commands during the Russian Civil War printed their own posters by commandeering privately-owned printing houses. This mark reads "Publication of the Agitation-Education Department at the Yekaterinoslav Regional Military Commissariat" indicating the poster was produced under the aegis of a Red Army command and its distribution was likely confined to the area of modern-day Dnipro, Ukraine. This mark was taken from PP 259 in the Collection.

The State Publishing House had its origins in Imperial Russia as the Royal Print Yard (Печатный двор) or, Pechatnyi dvor. The Soviets nationalized it in 1917. This publisher's mark is one of the early designs (from 1919) used by the State-controlled house. The design of the chop mark is attributed to the graphic artist L. Friedberg and it comes from PP 387 in the Collection. 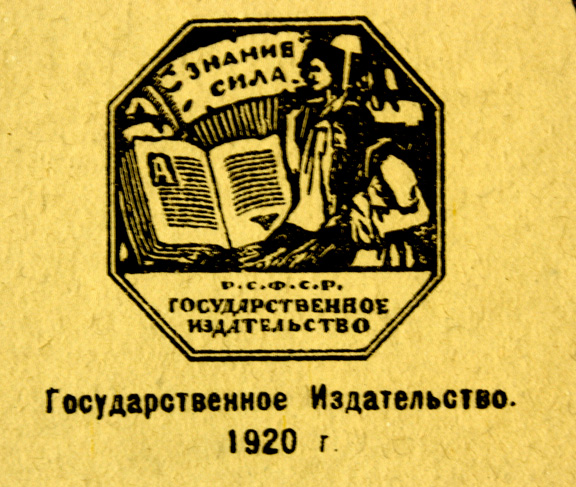 The Publishing House of the Petrograd Soviet was formed in the winter of 1917 by the Literary and Publishing Department of People's Commissariat for Education. The house produced political material (including posters), publications on women's issues and anti-religious ephemera. It also published the newspapers Izvestia (Spark), Krasnaya Gazeta (Red Gazette), and the periodical Plamia (Flame). In 1919, the house reorganized as Petrogosizdat and in 1924, it was renamed Lengosizdat (A.K.A. Lengiz), reflecting the city of St. Petersburg being changed to Leningrad, in honor of Vladimir Lenin. By the 1960s, Leningrad was one of the largest centers of publishing in the USSR. This publishing mark is from PP 323 in the Collection and its design is attributed to the artist L. Friedberg. 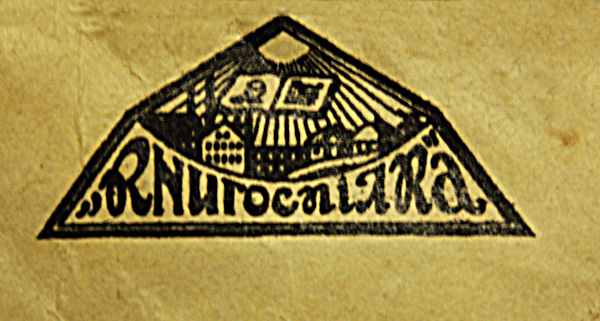 During the early period of the Russian Revolution, publishing and printing entities helped circulate literature and propaganda for the Bolshevik's cause. One such entity from Kharkov, Ukraine was Knigospilka, the All-Ukrainian Cooperative Book Merchandising and Publishing Union. After 1922, Knigospilka created publications on the cooperative movement along with informational literature about agriculture. This mark is on poster PP 393 in the Collection, a poster specific to the rural cooperative movement. 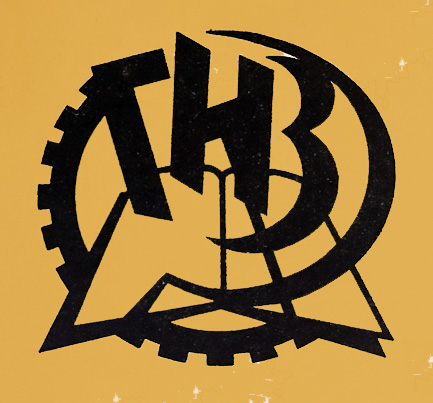 Gosizdat (A.K.A. Giz) was the State Publishing House of the Russian Soviet Federative Socialist Republic (RSFSR). Formed in May 1919, Gosizdat/Giz was the first major state-controlled publisher organized via an edict of the All-Russian Central Executive Committee to create a single institution for printing and publishing. With offices in Leningrad and Moscow, the GIZ banner published a wide array of books, posters and printed media. This image comes from a poster in the Collection

OGIZ was the Association of State Book and Magazine Publishers. It was established in 1930 by the Sovnarkom (Council of People's Commissars) to centralize all publishing entities in the Soviet Union. Apart from centralization, OGIZ also eliminated duplication of printed products by compartmentalizing the publishing industry. For example, all posters, art magazines and artistic books were placed under its "fine arts" section known as IZOGIZ (Izobrazitel'noe iskusstvo). Other sections of OGIZ published educational and pedagogical material (Uchpedgiz); socio-economic themes (Sotsekgiz); mass-politics (Masspartgiz); scientific and technical literature (Gostekhizdat); agricultural news (Sel'khozgiz); laws and codes (Yurizdat); health (Medizdat); children's themes (Detyunizdat); music (Muzgiz), and there was a section for dictionaries and encyclopedias. Overseeing these sections was Gosizdat, the State Publishing House. This image comes from the website fantlab.ru.

In 1949, OGIZ functions were transferred to Glavpoligrafizdat (Main Administration for Matters of Polygraphic Industry Publishing and Book Selling). In 1954, Glavpoligrafizdat was renamed Glavizdat and at that point, all publishing, printing and bookselling was separated into three entities.

IZOGIZ was the State Publishing House of Fine Art. It was formed in 1930 from the fine arts section of OGIZ. In 1963, IZOGIZ was re-named "Soviet Artist" (Sovetskii khudozhnik). The publishing mark is taken from PP 197 in the Collection.

Iskusstvo was the Art Publishing House (A.K.A. Visual Arts Publishing) that was created in 1936 from Ogiz-Izogiz. The Iskusstvo banner was part of the State Printing Works in Leningrad and Moscow and it published books on graphic design and the fine arts in addition to outputting numerous posters. This mark is from PP 079 in the Collection. Its design is typical to the Iskusstvo mark on posters from the immediate post-World War II era.

Soviet governmental agencies put their own publishing and printing marks on posters they created inter-departmentally. Below are a sample of various chop marks and their histories. 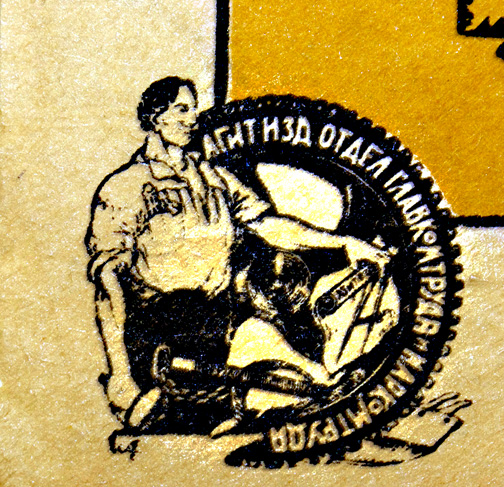 This publisher's mark indicates the poster was issued by the Agitational Publishing Department of Glavkomtrud and Narkomtrud. Glavkomtrud was the Central Committee on Universal Compulsory Labor while Narkomtrud was the People's Commissariat of Labor. The mark was likely designed by Ivan Simakov as it comes from PP 677 in the Collection-- a poster he designed. Simakov's biography is also found on this website. 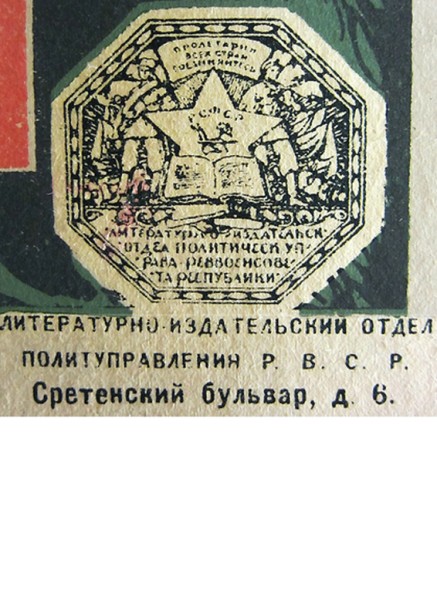 Litizdat was established in June 1919 upon the order of the Department of the Political Directorate (PUR) of the Revolutionary Military Council of the Republic (RVSR). A formal decree on October 25, 1919 approved its existence. As a result of hierarchy, Litizdat’s title was often abbreviated as Litizdat PUR RVSR on publications it issued. Gosizdat, the State Publishing House, managed Litizdat’s technical operations.

Litizdat distributed a total of 7.5 million posters, postcards, and lubki (illustrated broadsides) between 1919 and 1922. Inside the star at the middle of this publisher's mark is the crest of the Russian Soviet Federated Socialist Republic with a hammer and plow motif. This suggests the mark was designed prior to August 1918, before the familiar hammer and sickle crest debuted. At the bottom it reads, "Literary and Publishing Department of the Political Directorate of the Revolutionary Military Council of the Republic RSFSR, No. 6 Sretenskii Boulevard", (Moscow). No. 6 was also the address of Narkompros, the People's Commissariat of Education. The mark comes from PP 866 in the Collection. 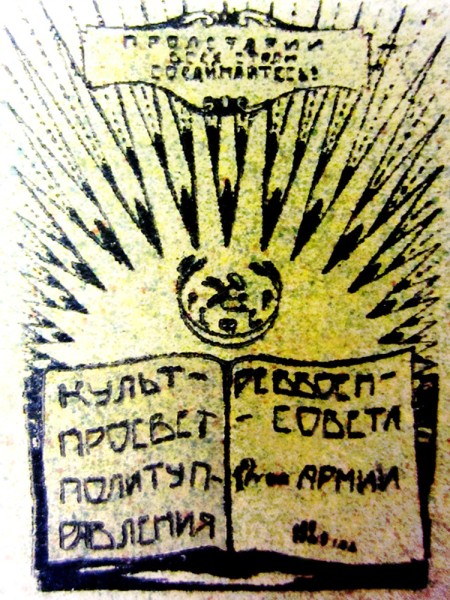 This publisher's mark was used during the Russian Civil War by the political section of a Soviet Army unit. "Proletarians of the World Unite" is seen at the top of the mark inside the scroll flourish. In the middle, in front of the sun rays, is a hammer and plow symbol with the initials RSFSR-- Russian Soviet Federated Socialist Republic-- formed in a semi circle. The hammer and plow motif suggests the mark's design was made before August 1918. On the book it is written, "Cultural enlightenment of the political department of the Revolutionary Military Council of the Red Army 1920." The poster was produced by the Soviet 12th Army, abbreviated on the poster as Xудож. Плак. Видавн. Поарм. XII ("Poster Artist Publication of the Political Department of the XII Army"). The mark comes from poster PP 804 in the Collection.