Boris Blank was a graphic artist, illustrator and poster artist. He also was a founder of a graphics school in Kharkov, Ukrainian SSR. Born in the city of Libava (in today's Republic of Latvia), Boris Blank studied at the Kharkov Art Institute from 1922 to 1929. He was granted a teaching position at the Art College in Kharkov where he worked from 1930 to 1932. Later, he was an instructor at the Art Institute of Kharkov (1933-1934, 1947-1950). Starting in the mid-1920s, Blank participated in regional and All-Union exhibitions. In 1954, he took part in the Exhibition of Fine Arts of the Ukrainian SSR held at the State Tretiakov Gallery at Moscow. The exhibit was dedicated to the 300th anniversary of Russia and Ukraine unification. In addition to graphic design, Blank produced woodcut and linocut designs, easel graphics and book illustrations. He also had experience with printing and industrial graphics. Works of Boris Blank are housed in the Ukrainian art museums at Kharkov and Berdiansk as well as in the Kazakhstan art gallery and in a bevy of museums around the Russian Federation. 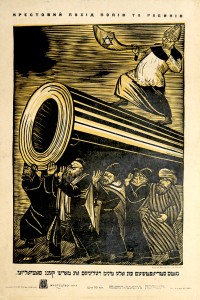