As a student in 1917, Boris Danchich studied at PAKh (St. Petersburg Academy of Arts) and in the 1920s, he graduated from VHUTEIN (Leningrad Higher Art and Technical Institute). As a student, Danchich gained a formidable base in architecture and town planning and he later became Chief Architect of the Leningrad section of the State Design Institute, Grostroiproekt. While Danchich is not known for his work as a graphic designer, he nonetheless created a limited number of designs in that field during his architectural career. From an architectural vantage, Danchich's noted realizations are: the metallurgical plant of Magnitogorsk and its city plan; the College and School of Federal Law in Novokuznetsk, Siberia; the bakery works in the Kushelevka neighborhood of Leningrad, and the town plan for Komsomolsk-on-Amur in Eastern Russia. During World War II, Danchich remained in Leningrad during the siege by the German Army. He died in 1942 while evacuating to the town of Orsk. 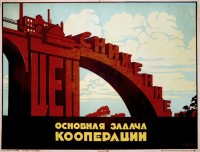