Aleksandr Druzhkov was a Soviet graphic artist and a poster designer. He studied at the Polygraphic College of Gosizdat State Publishing House from 1928 to 1931. During that same period, he was a member of the October Group of artists. While working with the October Group, he produced drawings for the journals Smena [Change] (1929-1931), Nashi dostizhenia [Our Achievement] (1932-1934), and Bolshevisticheskaya pechat’ [Bolshevik Press] (1932-1934). In 1928, he began his artistic foray into poster design producing such titles as, Above Ground and Below Ground We will Choke the Enemy with a Noose (1942) that was co-authored with artist Sokolov-Skalia; Long Live the Party! (1947); Honor to the Defenders of our Motherland! (1948) co-authored with I.M. Shagin and, Long Live the Soviet Cosmonauts (1969). He also worked as an editor on various publications. Aleksandr Druzhkov became a member of the Communist Party in 1943. 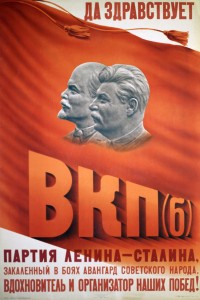 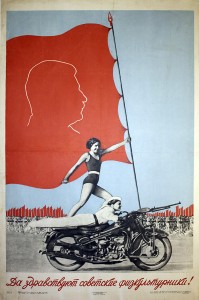