Nikolai Viktorovich Faivishevich was born in Grozny, Chechnya. Little is known about his early life. From a professional standpoint, he is documented as having designed instructional and political posters as early as the mid-1930s. In 1937, Faivishevich participated in the Technical Poster Exhibition of Moscow that was held inside the Kauchuk Factory club.

Prior to World War II, Faivishevich lived in Moscow. He was drafted into the Red Army in 1942 and reportedly attained the rank of Senior Lieutenant in the administrative service division. During his time in the army, Faivishevich worked as an artist in the editorial office of "Soviet Fighter" -- a newspaper published by the 5th Army. He reportedly advanced with his unit to Berlin in 1945 and then developed an exhibition dedicated to the assault on that city. In the post-war era, Faivishevich continued to design political and social posters for a myriad of government agencies in the USSR. 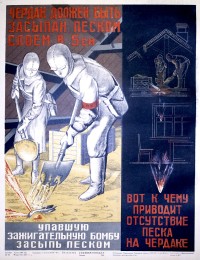