Formed in the late 1920s in Leningrad, the Izoram collective attracted amateur artists who worked closely with professionals in a mentoring atmosphere. The collective operated 80 izoiader (art nuclei) overseen by the Visual Arts Department (IZO) of the Commissariat of Enlightenment (Narkompros). Approved in March 1930, Izoram’s declaration boasted: “Izoram is a goal-oriented collective of working youth with a task, under the leadership of the Communist Party and the Komsomol, to actively participate in the class struggle of the proletariat and contribute to the socialist restructuring of life...". Despite their idealistic goals, the collective was short-lived. With the formation of the Artists Union of the USSR in 1932, Izoram was dissolved (along with other independent art groups) and its membership was absorbed into the Leningrad Association of Proletarian Artists. 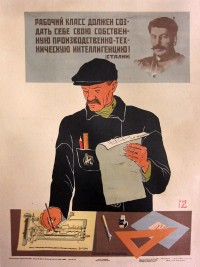