Mikhail Sergeevich Kal'manson was a Moscow-based artist who designed film posters as his main line of work. At times, the artist signed his artwork with the initial "K". Per a Soviet publication from 1960, Mikhail Kal'manson was the owner of a lithographic workshop. In 1923, he reportedly developed mosaic typesetting and discussed this endeavor with the printing section of GAKhN (State Academy of Artistic Sciences) in Moscow. Kal'manson was married and had at least two children (as indicated in a source on Soviet publishing), but additional history about the artist and his work is elusive. 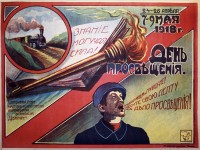