Naum Pavlovich Karpovskii was a noted Soviet painter and a graphic artist from Kharkov. Until 1941, he lived and worked in Kharkov but during World War II, he moved to Alma-Ata (Almaty), the capital of the Kazakh SSR. From 1925 to 1931, Karpovskii studied at the State Art Institute of Kharkov where he later served as an instructor. By the 1930s, he was designing political posters. When the threat war loomed over the Soviet Union during the late 1930s and early 1940s; Karpovskii (along with other artists of his era) concentrated his designs on military themes and morale-lifting subjects. During the war, he contributed to the TASS (Telegraph Agency of the Soviet Union) Studios in Kharkov and he designed for TASS KazIZO (Creative Association of Artists of Kazakhstan) in Alma-Ata.

Naum Karpovskii's 1948 painting, "Stalin rewards heroes in the Georgievsky Hall of the Kremlin" was subsequently made into a poster. In addition, he designed the poster titles: “Each grain of the harvest is a projectile against the enemy!” (1941), "Glory to the Soviet troops who hoisted the banner of Victory over Berlin!" (1945), and “Are you fulfilling your obligations in honor of the 25th anniversary of the Kazakh SSR” (1945), and more.

Naum Pavlovich Karpovskii was awarded the State 1st and 2nd degree prizes for his artwork. He was awarded diplomas at the All-Union Competition of Political Posters of 1948, 1957, 1959, and 1969. He also was a member of the Union of Artists of the USSR and, he was bestowed the title of Honored Art Worker of the Kazakh SSR. 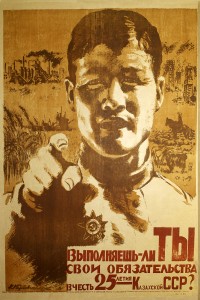 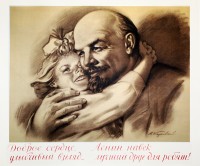