Gazanfar Alekper ogly Khalykov was a graphic designer from Azerbaijan SSR. Khalykov graduated from the Art Technical College in Baku. In 1928 he became a member of AzORRIIS (Azerbaijan Revolutionary Art Workers Association). He also was a contributor to numerous Azeri satirical magazines including Molla Nasraddin and Kirpi [Hedgehog]. Additionally, the artist illustrated the work of the Azerbaijani poet and philosopher Nizami Ganjavi. For the majority of his life, Gazanfar Khalykov lived and worked in Azerbaijan. In 1973, he was bestowed the title of “People's Artist of the Azerbaijanian SSR”. According to the 1986 Populyarnaia entsiklopediia iskusstva [Popular Encyclopedia of Arts], Khalykov designed political posters but he was known best as a historical painter, theater artist, and a master of book illustration. His works in book illustration tended to incorporate elements of traditional Persian art. Published sources alternatively spell the artist's surname Khalygov. 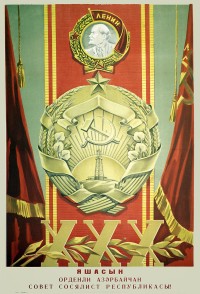