Boris Grigor'evich Klinch was a Soviet graphic artist, cartoonist and illustrator who lived and worked in Moscow. His professional career began during the 1920s. Klinch took-on the pseudonyms “Garri” (Harry) and “Petrushanskii”, when he signed his work. The artist was published in major Soviet humorist periodicals during the 1920s and 1930s, including Krokodil [Crocodile], Krasnyi perets [Red Pepper], and Frontovoi iumor [Humor for the Front]. Klinch began participating in exhibitions in 1921. In 1938 for example, his work was featured at the exhibition U nas i u nikh [Ours and Theirs] featuring political posters and mass paintings held in the Vyborgsky Palace of Culture in Leningrad. During the Second World War, Klinch’s drawings of military and home-front themes appeared as posters and postcards as part of the war effort. 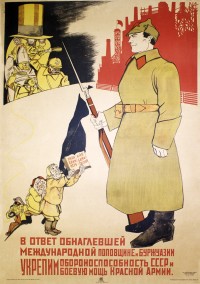