Heinrich Knirr was born in the Austro-Hungarian Empire in what is today the town of Pančevo, Serbia. Knirr studied at the Academy of Fine Arts in Vienna and at the Academy of Arts in Munich. It was in Munich where he opened a private art school in 1888 that became noted in Europe. The expressionist artist Paul Klee was one of his students. Owing to the period in which he lived, Knirr was a member of the Munich Secession of visual artists who broke away from the Munich Artists' Association and, he also a member of the Vienna Secession movement that was formed by Austrians who resigned from the Association of Austrian Artists.

At the beginning of World War I, Knirr stopped teaching (a decision likely brought on by the war) and moved to Bavaria. Following the Nazi Party's election to government in 1933, Knirr continued to work in Germany and reportedly fell into favor with German government elites. Albert Speer, Adolf Hitler’s chief architect, referred to Knirr as the "court painter". One of Knirr's most recognized portraits is a 1935-36 work showing Hitler standing with his left arm resting on a chair. The image was based on a black and white photograph of Hitler taken by Heinrich Hoffman. The Hoffmann photo (from 1935) was used as the frontispiece for catalogs in the Haus der Deutschen Kunst (House of German Art) in Munich. The portrait by Knirr was later used for the 1938 poster, Ein Volk, Ein Reich, Ein Führer (One People, One Nation, One Leader) during Germany's annexation of Austria and, Knirr's portrait was again used in the 1940s on posters supporting Germany's invasion and occupation of Eastern Europe and parts of the Soviet Union.

In 1937, Knirr was represented at the inaugural Große Deutsche Kunstausstellung (Great German Art Exhibition) with a different color portrait of Adolf Hitler. While there were other portraits made of Hitler, Knirr’s new version was the most import as it was the only time Germany’s leader permitted a live sitting. Knirr went on to exhibit fourteen other works in the House of German Art including portraits of Hitler's private chauffeur (Julius Schreck) and Klara Pölzl, Hitler's mother who died in 1907-- both were placed in Hitler's office at Berchtesgaden. Heinrich Knirr died in 1944 in Staudach-Egerndach, Bavaria, Germany. 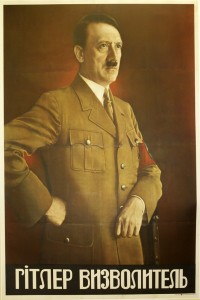 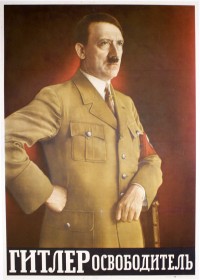 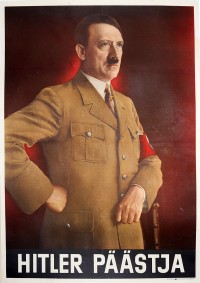