Throughout his career, Vasilii Nikolaevich Kostianitsyn worked as a portrait artist, a poster artist, a graphic artist, and even as a house painter. He was born into a family of icon painters who lived in a small town located on the right bank of the Volga River in Russia. Early on, Kostianitsyn (whose family name was likely Kostitis and of Latvian heritage) was trained in icon painting by his father and grandfather. Prior to the October Revolution of 1917, he dedicated himself to painting icons but after the revolution swept the empire, he focused on graphic art. This decision led him to a position on the Central Executive Committee of Soviets creating posters and prints to embellish propaganda trains. He created and exhibited works with revolutionary themes, including landscapes and portraits that incorporated markers of political change happening around him. In 1922, Kostianitsyn graduated from the Moscow School of Painting and thereafter, he became well-known for his posters including three noted works from the 1920s, Peasant! The Red Army Protects your Grain from the Enemies; Quitter! You help the counter-revolution!; Parasites and do-nothings, whoever doesn't work for themselves disturbs the work of others. He frequently signed his posters using the pen-name Kost.

In 1923, Kostianitsyn was one of the first members to join the A.Kh.R.R. [Association of Artists of Revolutionary Russia]. An advocate of Socialist Realism in art, Kostianitsyn produced theoretical writings on the subject during the 1930s whereby he related the style of art politically to the Soviet Union. 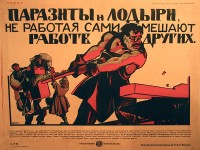 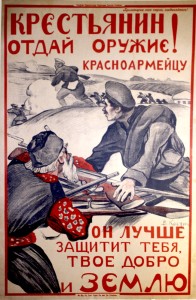