Aleksei Aleksandrovich Radakov was a Soviet graphic artist. In 1900, he graduated from the Moscow School of Painting, Sculpture and Architecture and continued his education by enrolling in the St. Petersburg TsUTR (Central School of Technical Drawing) -- also known as Stieglitz Academy. Thereafter, Radakov developed his skills by taking private lessons and he contributed cartoons and illustrations to satirical journals. Prior to the Russian Revolution of 1917, Aleksei Radakov worked as a theater set designer and as an art teacher. In addition, he served as chief editor (and co-founder) of the children’s magazine Galchenok’ (Young Jackdaw) from its founding in 1911 until 1913 when the magazine was terminated. Immediately after the revolution, Radakov was employed as a festival designer, and he designed for the Bolshoi Dramatic Theater in Moscow. Early in the Soviet-era, Radakov devised posters for the ROSTA studio (Russian Telegraph Agency) in Petrograd (St. Petersburg) and in Moscow. After the Russian Civil War, he was made art director of the children’s department at Gosizdat State Publishing House, Petrograd (St. Petersburg). While the majority of his poster designs were political in nature, he is also known for his designs on the subjects of literacy and education.

Radakov showcased his work at the 1922 International Book Fair, Photographic, Lithographic and Advertising Exhibition held in Florence, Italy, and at the 1925 International Exhibition of Modern Decorative and Industrial Arts in Paris. From 1922 to 1929, the artist contributed to Soviet satirical journals. In 1941, Radakov was involved in poster production at the TASS studio (Telegraph Agency of the Soviet Union). Published sources of the Soviet-era alternatively cite the artist’s birth year as 1877 and his death date as July 11. 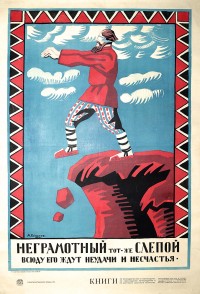 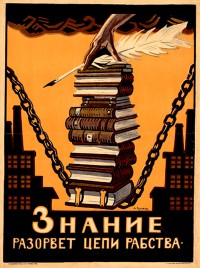