Throughout his career, Iakov Timofeevich Ruklevskii was noted for his graphic design and for his work on cinema posters. A self-taught artist, Ruklevskii became the head of poster production for Goskino (State Committee for Cinematography of the USSR) and helped pioneer cinema advertising in the USSR. His designs for Goskino tended to emulate the style of the Stenberg brothers (Vladimir and Georgii), the distinguished graphic designers from the 1920s and ‘30s with whom Ruklevskii collaborated. Iakov Ruklevskii contributed his poster designs to the First (1925) and Second (1926) Exhibitions of Film Posters in Moscow, and he exhibited at the International Exhibition of Decorative Arts in Monza, Italy in 1927. He also exhibited at the “Artists of the Russian Soviet Federated Socialist Republic over 15 Years” held at the State Historical Museum (1933, Moscow). Among Ruklevskii’s famous cinema posters is the design he produced for “Oktober” (1927), the cinematic achievement from director Sergei Eisenstein. 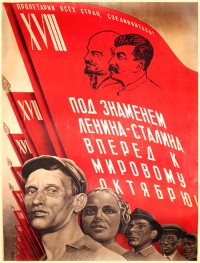