Vladimir Aleksandrovich Serov was a painter, poster artist and illustrator who primarily worked in the Socialist Realism aesthetic. Born in a small town situated on the Volga River; Serov graduated from InPII (Institute of Proletarian Visual Arts) in Leningrad (St. Petesburg). He went on to perform his post-graduate work at InZhSA (Institute of Art, Sculpture and Architecture) -- the successor institute to InPII where he served as an instructor there from the 1930s until the 1960s. Serov was the chairman of LOSKh (Union of Soviet Artists) from 1941 to 1948, and the chairman of Orgkomitet SKh (Organizing Committee of Soviet Artists) from 1957 to 1960. He became a member of the Academy of Arts of the USSR in 1947 and was elected its vice-president, and served as its president, from 1962 to 1968. Politically, Vladimir Serov was a communist party member. He served as a deputy of the Supreme Soviet of the RSFSR from 1958 until his death in 1968.

Serov was awarded the 1948 Stalin Prize for his painting “Lenin Proclaims Soviet Power", a stirring scene of the 1917 Russian Revolution showing Lenin with Bolshevik leaders, workers and soldiers in the Smolny Institute of Petrograd. The painting became an iconic symbol of Socialist Realism. Copies of Serov's painting were used as posters, placed on the covers of books, and the painting was used on a Soviet postage stamp in 1954. During the period of de-Stalinization in the 1950s, Serov was reportedly “ordered to revise the painting” and to replace the likenesses of Josef Stalin, Felix Dzerzhinskii and Iakov Sverdlov (all standing behind Lenin) with images of nondescript workers. Serov's second Stalin Prize was awarded in 1951 for his painting "Peasant Delegates Talking to Lenin" (a.k.a. "On Foot to V.I. Lenin") 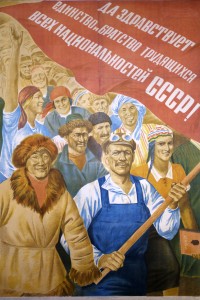 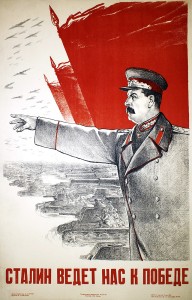