Ivan Simakov worked principally as a graphic designer for books. It was not until after the Russian Revolution that he began designing posters. Simakov graduated from the St. Petersburg Academy of Arts in 1912 with a degree in architecture. He lived and worked in St. Petersburg (Leningrad) throughout his life.

As a book illustrator, his illustrations were included in the 1907 title "Pushkin in Graphics”. From 1919 to 1925 he worked for the Leningrad branch of the State Publishing House (GIZ) where he designed book covers and political posters. In 1918, he served as an illustrator for the "People's Library" series of literature that was initiated by the noted writer Maxim Gorky. Simakov provided page art and cover designs for several books in that series. In 1924 he illustrated the children's book "Pioneer" published by Lengiz.

Foremost among his poster designs of the early-revolutionary period are the titles "Remember the Hungry" and “Long Live the Proletarian Holiday of May 1st!” both published in 1921. Over 300 of his designs, architectural drawings and posters were transferred in 1928 from Lengiz Publishers in Leningrad to the Perm Art Museum of the Soviet Union. 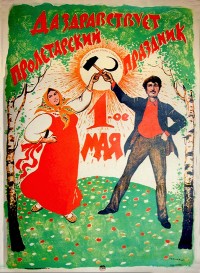