Aram Vramshapu Vanetsian was born in what is today the Armenian city of Gyumri. From 1915 to 1918, he studied at the Stroganov School for Technical Drawing, and from 1920 to 1923, Vanetsian attended the Moscow VKhUTEMAS [Higher Art and Technical Studios] where painting was his study concentration. Of his portraits, the one he created in 1939 of the Russian writer and playwright Issac Babel turned out to be the last representation of the writer made during his lifetime. In 1940, Babel died in Moscow while serving time in Butyrka prison.

Aram Vanetsian illustrated books for the publishing houses of Goslitizdat [State Publishing House of Literature], Detgiz [Children's Publishing House] and Sovietskii Pisatel' [Soviet Writer]. While his poster designs include political and advertising themes, he entered into graphic design late in his career working on posters beginning in the 1930s. His style was noted for its “simple compositions…, usually black and white, using one red color sheet.” Two posters he created using this motif were “Long Live the Union of Workers and Peasants - the Basis of Soviet Power!” (1937) and “Long Live our Red Army and Navy!” (1938).

During World War II, Vanetsian was sent to the front. He created a series of battle sketches, pictorial portraits and combat leaflets. After the war, his primary work was in the illustration of books for Soviet publishing houses. 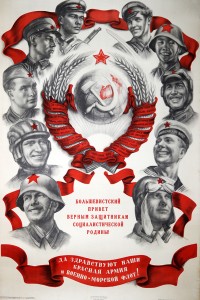