Lev Viaz'menskii was born in the Vitebsk province of the Russian Empire in what is today the Republic of Belarus. In his young adulthood he traveled to Moscow to study at VKhUTEMAS-VkHUTEIN (All-Union Technical Arts Institute) where he was enrolled from 1923 to 1930. After graduation he worked in Moscow as a professional artist. While he created poster designs during his short-lived career, his main artistic skills were in painting and monumental art. He was a member of the artist cooperative AKhR (Association of Artists of the Revolution) and a member-founder of RAPKh (Russian Association of Proletarian Artists). During the late 1930s at the time of the Great Purge, Viaz'menskii was targeted for arrest by Soviet authorities. He was executed in 1938. 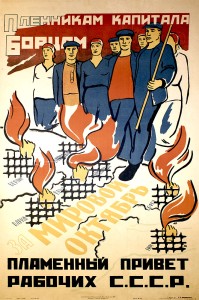