Valentin Petrovich Viktorov was a prolific poster artist, illustrator, and a graphic designer. From 1927 to 1931, he studied at the Moscow State Technical School of Fine Arts in Memory of the 1905 Revolution. During the 1920s, he became a member of AKhRR (Association of Artists of Revolutionary Russia). His poster-designing career commenced in the 1930s and it continued until his death in 1981.

During the Second World War, Viktorov was called-up for military service, and after the war he began his long-time collaboration with numerous state-owned publishing houses. He principally designed for Iskusstvo (Art Publishing House), Izogiz (State Publishing House of Fine Art) and Izobrazitel’noe Iskusstvo (Fine Art Publishers). Valentin Viktorov designed posters with themes covering aviation, space exploration, anniversaries of the October Revolution, and many other subjects. Starting in 1954, the artist worked with the All-Union Chamber of Commerce, a leading entity for Soviet exhibitions abroad, whereby he produced exhibition designs in Vienna, Damascus, Zagreb, Ljubljana, Milan, Shanghai, and in Oklahoma. 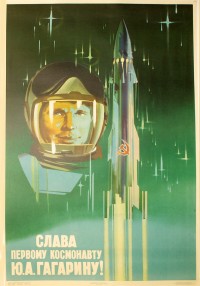