Boris Vasil'evich Zvorykin was a graphic designer and book illustrator in early 20th century Russia. His rich illustrations are characterized by colorful and decorative details. Zvorykin is principally associated with the Neo-Russian art movement of the early 20th century. The son of a Moscow-based merchant, Zvorykin graduated from his core studies in 1892 and went on to study for one year at the Moscow School of Painting, Sculpture and Architecture. By 1898 his illustrations were published in books in Imperial Russia.

The artist who first had an influence on Zvorykin was Elena Dmitrievna Polenova, a painter and graphic designer who was also one of the first illustrators of children's books in Russia. Children's books would become an endeavor linked to Zvorykin later in his career.
A number of children's books from late Imperial Russia are adorned with Zvorykin's illustrations such as, "The Tale of the Golden Cockerel" (1903) and "For the Motherland!" (1915) in addition to a host of other titles. Zvorykin was also known for his holiday cards and intricately designed postcards.

From 1909 to 1912 he took part in decorating the Feodorovskii Sovereign Cathedral situated near the Alexander Palace in Tsarskoye Selo, St. Petersburg. Zvorykin went on to design the title page for the 1915 commemorative album for the cathedral. He went on to decorate the Cathedral of Alexander Nevsky in the city of Simferopol' however, following the Russian Civil War, the badly damaged cathedral was demolished by the Soviet government. In 1915, Zvorykin and a compliment of artists, art historians, writers and architects founded “The Society for the Renaissance of Artistic Russia” (OVKhR) an organization that propagated Russian art and art history to the public.

After the Russian Revolution of 1917, Boris Zvorykin designed covers for the magazine Krasnoarmeets (Red Army Man) and created political posters for the Bolsheviks such as "The Red Plowman" and "The Battle of the Red Knight and Dark Power"-- a design that borrowed from traditional Russian allegory and mythology.

As the Russian Civil War commenced, Zvorykin fled Soviet Russia for Paris. In Paris, he worked with the art publishing company H. Piazza. While there, he created the concept for his book “The Firebird and Other Russian Fairy Tales”. The book was eventually published and Zvorykin contributed the French translations for the original Russian text. He later went on to illustrate a host of books under the H. Piazza banner. In 1928, he took part in the Brussels exhibition "Luxurious Book". He died in Paris during World War II. 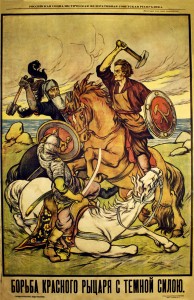