Located in Moscow at 10 Shluzovaia Embankment, this printer was placed under the Moscow branch of the Poligrafkniga (Book and Magazine Printing) Trust. Printing trusts came about in 1921 when the Soviet government consolidated the best printing houses into state-owned trusts. Historically, the printing workshop at Shluzovaia Embankment served the publishing house of Tsentrizdat (Central Publishing House of the Peoples of the USSR). In 1931, Tsentrizdat was dissolved and at that point, the printing house was likely reorganized as the 17th Typo-lithography. Soviet posters spanning the 1940s to the 1950s help to indicate that 17th Typo-lithography served as a contract printer for the Scientific and Technical Publishing House of Energy Literature (Energoizdat, i.e. Gosenergoizdat). Post-Soviet publishing sources indicate the 17th Typo-lithography Workshop became the 1st Exemplary Printing House of the Ministry of Press and Information of the Russian Federation. 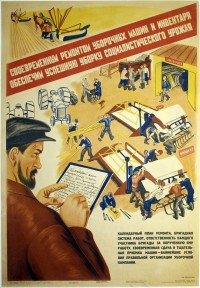