The headquarters of the Berlin Printing House (Berliner Druckerei ) was located at 43 Dresdener Strasse in Berlin. Historically, this address was the site of numerous publishing firms from the 1890s to the 1950s. Before and during World War II, the address was home to the offices of the Munich-based M. Müller & Sohn Buchgewerbehaus (Book trade house). East German sources from the 1950s indicate the Berlin Printing House also had an address at 139/140 Linienstrasse in Berlin. That address had been the Reichsnährstand (State Nutrition) Publishing office in the pre-war era. 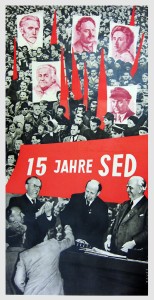