Bumpoligraftrust (Bumazhno-Poligrafcheskii trest) was formed in 1922 as a printing and paper trust in the city of Viatka, 900 kilometers east of Moscow. In addition to the printing houses it oversaw, the trust encompassed four paper mills. In 1934, the city of Viatka was renamed "Kirov" in honor of Sergei Mironovich Kirov (1886-1934), deceased Communist Party leader of Leningrad. The city was re-named Viatka after the fall of the USSR. 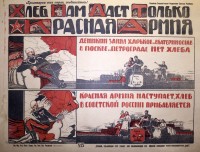