De Jong & Co. was lithographic printer based in Holland. It was active between 1911 to 1994. The firm was considered to be an important European design hub in addition to it being a high quality, independent printer. During the 1950s and 1960s, De Jong & Co. experimented with printing techniques that propelled its standing in the world of international graphic design and visual arts. 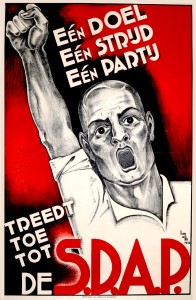