Gosizdat Musical Score Printing House was situated at 13 Kolpachnyi Lane in Moscow. It was under the management of the Musical Sector (Muzykal'nogo Sektora Gosudarstvennogo) of Gosizdat, the State Publishing House. In 1930, Musical Score Printing House was reorganized as Muzgiz (State Musical Publishing House) and in 1964, it was re-named Muzyka (Music). During the Soviet-era, Muzyka maintained a publishing monopoly on sheet music, music books and musical literature. Early-on, the printing house was the State Publishing House of Sycamore Music (Notopechatnia Muzykal'nogo Izdatel'stva Sikomora) owing to the fact that Sycamore had been the independent publishing and printing entity prior to nationalization. Historically, the printing house on Kolpachnyi Lane was owned by Petr Ivanovich Iurgenson (1836-1903) and his family who were long-time music publishers in Imperial Russia. 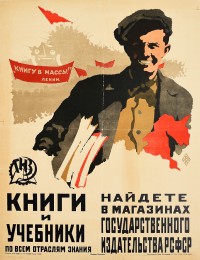