The October Typography of GSNKh (Provincial Soviet of National Economy) was located in the city of Yaroslavl’ northeast of Moscow. The printer was situated at 61 Respublikanskaia Street and little information is available on the history of its operation. From an economic management perspective, the GSNKh was a government entity subordinate to the VSNKh (Supreme Soviet National Economy). 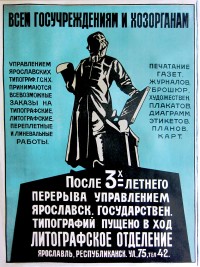