As early as 1921, the newspaper Rabochee Put' (Working Way) served as the organ of the Omsk Provincial Executive Committee of the Communist Party. The daily newspaper was printed in Omsk at 19 Lenin Street. It is unclear however if the Omsk paper was connected to the Petrograd (St. Petersburg) newspaper of the same name that was founded in 1917. 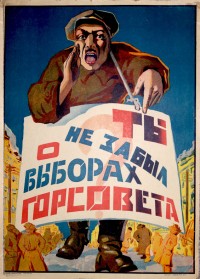