Mikola Oleksiiovich Skripnik (1872-1933), a.k.a. Mykola Skrypnyk, was a Bolshevik leader that served as the People’s Commissar of Education in Ukraine from 1927 to 1933. In that capacity, he strove to make Ukrainian the official language of the Republic, and he is noted for his role in standardizing Ukrainian orthography during the late 1920s. After being removed as the Commissar of Education in 1933, Skripnik killed himself rather than face the straining political purges of the era. 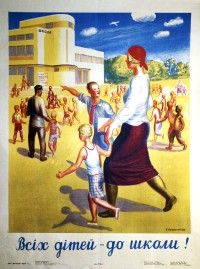