In August 1931, the Central Committee ordered certain publications separated from OGIZ (Association of State Book and Magazine Publications), the state-owned publishing conglomerate of the USSR. As a result of the separation, KOGIZ -- the Bookselling Association of the State Publishing House (Knigotorgovoe ob'edinenie gosudarstvennykh izdatel'stv) was formed. In various USSR republics, local bookselling continued but Kogiz controlled a majority of the nation's retail sales through its chain of book shops in addition to serving as the nation’s book distributor. In 1949, Kogiz was dissolved in favor a more localized book shop system that in 1953, became part of the Ministry of Culture. In the early 1960s, book distribution was carried out via Goskomizdat (State Committee of the Council of Ministers of the USSR on Publishing, Printing and Book Trade). 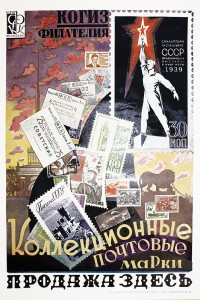