Melantrich Publishing (Nakladatelství Melantrich) was founded in the late 1890s as a media outlet of the Czech National Social Party (ČSNS). The publishing firm was named in honor of Jiří Melantrich, a 16th century Czech writer and publisher. After 1948, Melantrich Publishing was nationalized and it was split into three sections. In 1950 the Czechoslovak Socialist Party controlled the publishing house although the state remained its formal owner. Under state control, the house changed its name to Svobodné slovo-Melantrich (Melantrich Free Word). In 1967, the firm’s name reverted to Melantrich. The house closed in the late 1990s following a failed acquisitions merger. 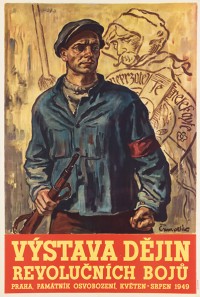