Narkomfin was created at a national level in 1923 and its management structure was based on the People's Commissariat of Finance of the RSFSR (Russian Soviet Federative Socialist Republic) that existed as early as 1917. Its powers overseeing state financial control had been previously under Rabkrin (Workers' and Peasants' Inspectorate). In 1946, Narkomfin was re-configured as the Ministry of Finance of the Russian Soviet Federative Socialist Republic. The entity existed until the collapse of the USSR in 1991.

Historically, when the Bolsheviks seized power immediate action was taken against the Russian banking system. In November 1917, the Russian State Bank was dissolved and replaced by a “People's Bank”. The Imperial Credit Chancellery and Department of the State Treasury became part of the new bank. In December 1917, the Nobles’ Land Bank and the Peasants’ Land Bank were closed. By January 1918, State loans and foreign loans were terminated, private insurance abolished—its firms placed under state control. By December 1918, joint-stock land banks, mutual credit agencies and public (metropolitan) banks were closed along with the eradication of municipal and regional credit societies. Foreign banks were also shuttered and the Russian central cooperative (Moscow People’s Bank) was nationalized. The process of financial nationalization was complete by 1919. 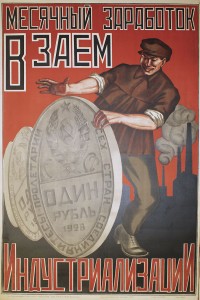