Prior to Bolshevik control, the procurement and management of foodstuffs in Russia was carried out via administrative divisions. To change this, Narkomprod (People's Commissariat of Food) was created by the Bolsheviks to manage food supply for the public and military, and to take charge of the procurement of agricultural implements, seeds and products of mass consumption. Through a government directive in May 1918, Narkomprod was given singular control of food distribution under a centralized system. With regards to the Russian Civil War, Narkomprod played a key role in the success of the Red Army by providing it with consumables. After the war, the New Economic Policy (NEP) led to the termination of food rationing and mass requisitioning and Narkomprod was dissolved in 1924. 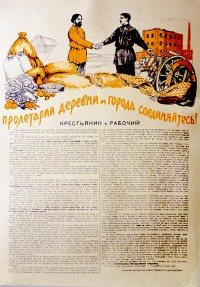