When the Bolsheviks took control of the government in 1917 they formed a Committee for Military Affairs to establish their military organization. Soon after, a formal reorganization of the nation's armed forces coincided with the dismantling of the War Ministry that had been part of the Russian Provisional Government prior to Bolshevik control. Staff loyal to the Imperial Russian and White Russian commands was "purged" and in their place, military "specialists" were introduced. Out of reorganization the People's Commissariat for Military Affairs (Narkomvoen) was formed. Narkomvoen's most immediate tasks were dealing with the mass demobilization of Imperial Army troops and the formation of a new Red Army and Red Navy. In addition, it introduced universal military training. In March 1918, Leon Trotsky became the head of Narkomvoen. He led the organization through the Russian Civil War and maintained the post until 1923. Narkomvoen was the central apparatus that managed the Soviet military until the People's Commissariat for Defense (NKO) replaced it in 1934. 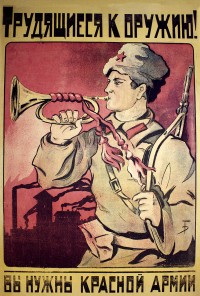