Scientific Thought Publishing House was located at 14 Pushkin Street in Kharkov, Ukrainian SSR. According to research, the publisher was formed in November 1922 as an organ of the Editorial and Publishing Commission of the Academy of Sciences of Ukraine. In 1927, it became the publishing arm of the All-Ukrainian Academy of Sciences. In 1964, the publisher assumed the name "Scientific Thought" (Naukova dumka). Historically, Scientific Thought has been the preeminent academic publishing house in Ukraine. It has a history of developing and publishing monographs for the humanities, for social and technical issues and for the pure sciences. It also published scholarly journals and serial publications and histories on the Ukrainian SSR as well as multi-volume works on Ukrainian literature and a Ukrainian dictionary. As of 2021, the publishing house was operating in Kiev, Ukraine. 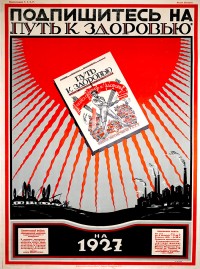