Tatgosizdat publishing house reportedly first served as the printing department of the Tatar-Bashkir Commissariat and it was in charge of Chuvashpechat, the publishing house of the Mari Autonomous and Perm regions. In 1919-20, the publisher was made a branch of the State Publishing House of the RSFSR under the administration of Tatnarkompros (Tatar Commissariat for Public Education). In 1927, Tatgosizdat was reorganized as Tatizdat (Tatar State Publishing). Tatgosizdat/Tatizdat published works chiefly in the languages of Russian and Tatar.

While books, journals, scientific and technical literature served as the bulk of its output, it also published posters. Its headquarters were based in the city of Kazan. Today, the publisher remains in Kazan under the name Tatar Book Publishers. It is one of the largest publishing houses in Tatarstan, Russia disseminating fiction and children's literature, textbooks and academic publications. 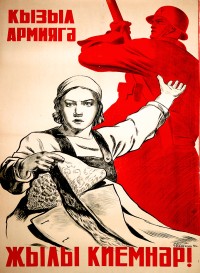