Sandor Ek was born Alex Keil in a small village in the Austro Hungarian Empire. He worked as a graphic artist and poster designer in his native Hungary but also worked and lived in Austria, Germany and in the Soviet Union during periods of his life. Early-on, Ek became a member of the Hungarian Communist Party. He studied at arts schools run by the Hungarian painter and communist, Béla Uitz, and by József Nemes-Lampérth, a Hungarian artist and a proponent of the avant-garde.

Following the 1919 collapse of the Hungarian People's Republic, Sandor Ek immigrated to Vienna, Austria and in 1921, he participated in the “Young Worker’s International” in Moscow. At that point, he went on to study at VkHUTEMAS (State Art and Technical School) in Moscow. He later returned to Budapest, where he was subsequently arrested. In the mid-1920s, he moved to Germany and worked for the leftist publications “Rote Fahne” [Red Flag] and “Arbeiter-Illustrierte-Zeitung” [Workers Illustrated Newspaper]. Due to the rise of Adolf Hitler in Germany, Ek moved to the Soviet Union in 1933.

During World War II, he joined the Red Army of the USSR. Upon returning to war-torn Hungary, he photographed post-war exhumations of mass graves of citizens -- deaths carried out by German and Hungarian soldiers. Following the Soviet occupation of Hungary in 1944, Ek began designing posters with anti-Nazi themes. Ever the loyal communist, during the 1956 Hungarian Uprising (an anti-communist revolution lasting for several months), Ek's support of the communist leadership got his name placed on a list "of those who were to be destroyed..." in the uprising. Sandor Ek spent the remainder of the post-war period in Hungary working as a graphic designer and painter. For his work in the arts, Sandor Ek was awarded the Kossuth Prize in 1951. 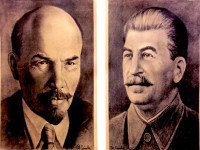 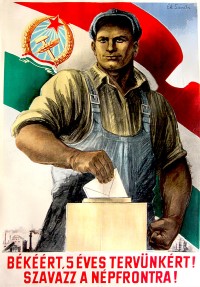