Evgenii Abramovich Kazhdan was a Soviet graphic artist, illustrator, and a poster artist. Although Kazhdan is noted for his poster designs, he began his professional art career as an interior designer. It was not until the mid-1950s that he entered into the field of graphic design for posters. Kazhdan's early designs tended to center on advertising and the lottery as well as concerts, theater, the circus, sport, and health education. He was admittedly influenced by master poster artists Gustav Klutsis and John Hartfield. Through his own mastering of techniques from drawing and painting to photography and collage, Kazhdan’s posters reflected the breadth of his artistic skills.

During World War II, Kazhdan served in the Red Army. From 1947 to 1954, he worked as a graphic designer for the Moscow Regional Art Fund (Mosoblhudozhnik) and from 1967 to 1968, he worked for the Moscow Art Fund in their workshop of visual propaganda. Kazhdan designed for catalogs, invitation cards and he elaborated exhibition halls working internationally in Bulgaria, Romania, Poland, Hungary and Finland. 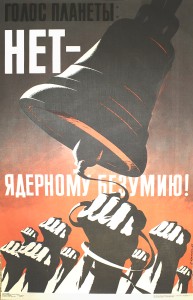