In his youth, Pavel Petrovich Sokolov-Skalia worked as an apprentice in the studio of Il’ia Mashkov, one of Imperial Russia's modern masters. He continued his education at VKhUTEMAS (Higher Art and Technical Studios) and he later became a founding member of the avant-garde collective Bytie (Being). When the group dissolved around 1926, he joined the A.Kh.R. (Association of Artists of the Revolution) and he served as one of its lead teachers. Sokolov-Skalia also taught at MIPIDI (Moscow Institute of Applied and Decorative Art), the Potemkin Pedagogical Institute (in Moscow), and at MGKhI (Moscow Secondary Art School). In 1925 and in 1932 he was associated with Put MOPRa, a magazine of MOPR (International Society for Relief of Revolutionaries).

During World War II, Sokolov-Skalia was the artistic director of the TASS (Telegraph Agency of the Soviet Union) studio where he designed approximately 200 posters between 1941 and 1946. The artist was twice awarded the Stalin Prize (1942 and 1949) for his posters and caricatures. Pavel Petrovich Sokolov-Skalia was elected to the Academy of Arts of the USSR in 1949, and in 1956 he was bestowed the title of People’s Artist of the Russian Soviet Federative Socialist Republic. 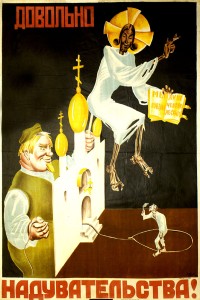 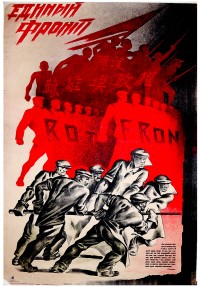