Siima Iakobvna Shkop studied hairdressing as her initial career path. She began working as a hairdressing assistant at the reputable salon of Jan Czipan in Tallinn during the late 1930s. Shkop entered the art word by studying sculpture under the tutelage of the noted Estonian artist, Voldemar Mellik.
In the summer of 1940, Estonia became a republic of the Soviet Union and around that time, Shkop entered the state-run School of Applied Arts named for Estonian artist Jaan Koort. There she concentrated in graphic art and studied under the Estonian designer and illustrator, Paul Luhtein.

Shkop and her family moved out of Estonia before the official evacuation during World War II. Instead of fleeing to the West, the family went to Leningrad (St. Petersburg) USSR. Their travels led them to Soviet Uzbekistan during a period of combat that endangered their planned exodus. In Fergana, Uzbekistan, Shkop worked as a hairdresser at Voentorg, the Military Trade Office. After the war, the family returned to Tallinn and she enrolled in art school, graduating in 1948 from the Institute of Applied Arts with a concentration in graphic design. She married the Estonian writer Viktor Mellov (known professionally as Andres Vanapa). The couple had two children.

As a graphic designer, Shkop's focus was illustrating books and creating portraits but in 1951, after working at the State Art Foundation’s experimental studio, she embarked on the development of poster art. She was appointed head of the poster section of the Artists' Union of which she became a member in 1948. Shkop was admittedly frustrated by the “stylistic ideology of the posters” whereby Communist Party functionaries decided the artistic value of her work. Party overseers had her remake illustrations not conforming to communist ideology, she mentioned in an interview she gave late in her life. At one point, Shkop was “accused of Germanism” although such criticism appeared not to affect her post in the Artists' Union.

In the early 1950s, Shkop embarked on the illustration of books. Her first illustrations were published in 1953. Children’s book illustration thereafter became her mainstay. "Children's books were popular because so few were published at the time”, she said in an interview. From 1965 to 1972 she was the artistic editor of Valgus Publishing and she worked as a freelance artist after the collapse of the Soviet Union. 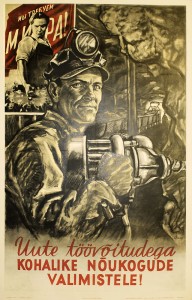