The Stenberg brothers, Vladimir and Georgii, collaborated on numerous projects from theater design to commercial advertising to film posters from 1923 until Georgii's death in 1933.  Stenberg designs were characterized for their marketing appeal and experimental designs. Their hallmark was the incorporation of photography, bold color schemes and groundbreaking typography.

From 1912 to 1917, the Stenberg brothers studied in Moscow at the Stroganov School of Industrial Arts and at SVOMAS, the Free Art Studios, from 1917 to 1920 where they were among the first graduates of the institution. They were members of Inkuk [Institute of Artistic Culture] and Obmokhu [Society of Young Artists]. It was in January 1921 that the brothers exhibited outside Obmokhu and the exhibit catalog for the show used the first recorded example of the term "Construtivist" in relation to the exhibit's non-objective forms of artwork.

As pioneers of constructivism and applied arts, Stenberg posters were effectively used as agitprop to inform a burgeoning Soviet revolutionary generation.  In 1918, the brothers designed May Day "agit-decorations" in Moscow. In 1925, their designs were exhibited at the International Exhibition of Modern Decorative and Industrial Arts in Paris.

The Stenberg style flourished within the realm of film posters. As the Soviet film industry blossomed alongside the 1917 October Revolution in Russia, film posters corresponded with montage principles used in early Soviet films.  Rakish and jutting lines, parallel imagery and close-up photography were all hallmarks of a Stenberg-designed film poster. The brothers also created theater sets for Threepenny Opera (1930) at the Moscow Kamernyi Theater, designed interiors for the Moscow Palace of Culture of the Motor Vehicle Plant (a.k.a. ZIL Palace of Culture) (1930), and they designed holiday decorations on Red Square from 1928 to 1934. 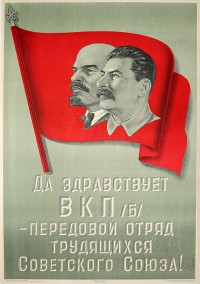 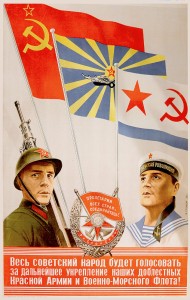