The Aufbau-Druckerei (Construction-Printing) was located in Köthen, a city in the eastern section of Germany. It is the capital of the district of Anhalt-Bitterfeld in Saxony-Anhalt. According to German publications, the firm Construction-Printing was in existence prior to World War II. After the war, the town of Köthen was geographically situated within the Soviet zone of Allied Occupied Germany and in 1949, East Germany was established in the Soviet Occupation Zone. 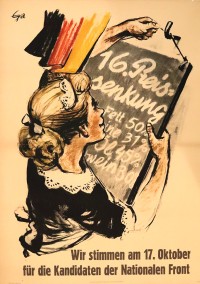