Ukrainian National Cooperative Bank (Ukrainbank) was founded in 1917 in Kiev. The bank served as the financial body for credit and agricultural cooperatives in Ukraine. By 1919, the bank had sixteen branches with the majority of them in urban centers. The bank also supported various Ukrainian cultural outlets such as Ukrainfilm, a major motion picture studio tied to the Soviet-backed Soiuzkino studio. During the Russian Civil War, Bolshevik authorities shuttered the bank but it re-opened in 1922 under the supervision of the All-Union Commissariat of Finance in Moscow. Ukrainbank permanently closed in the summer of 1936 after a bank restructuring endeavor transferred its assets and liabilities to the All-Union Bank for Construction of Trade and Cooperation (Torgbank). 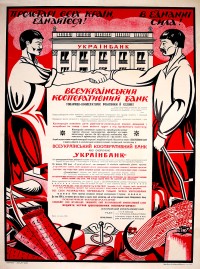