The Department of Fine Arts (IZO) was an administrative entity that was a part of Narkompros, the People’s Commissariat of Education. The fine arts department was created within months of the October Revolution, and among its scope of duties (carried out by its main branches in Moscow and in Petrograd), was the development of arts education and arts training. Free workshops were created in the cities and in provinces in addition to programs for training in the arts. Additionally, there was a literary section of IZO and an architectural section devoted to museum restructuring and protection of antiquities. In February 1921, IZO was restructured into two departments and was made subservient to Glavpolitprosvet, the Main Administration for Politics and Culture-- the entity that directed political education and agitation. Not only did Glavpolitprosvet manage IZO but it could also veto decisions on artistic matters. Furthermore, IZO's art education programs were placed under Glavprofobr, the Main Administration for Professional-Technical Education. 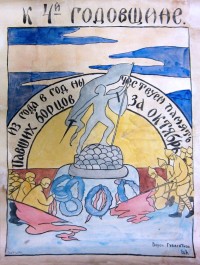