Viktor Ivanovich Govorkov studied art in the studios of the Club for Soviet Workers in Vladivostok during the mid-1920s. From 1926 to 1930, Govorkov studied at VKhUTEIN [Higher Art and Technical Institute] in Moscow under the tutelage of Sergei Gerasimov where he concentrated in monumental art. His thesis at VKhUTEIN was a sketch for a panel intended for decoration on Red Square in preparation for the May Day festivities there in 1930. Upon his graduation he served in the Red Army.  His professional career began when he obtained a job as an illustrator at two Vladivostok newspapers. During the 1920s, Govorkov was active in book design. He began to exhibit professionally in 1931.

It was during the 1930s that Govorkov concentrated on designing political posters while also mastering the genre of satirical posters.  During World War II, he was called for active duty and participated in combat under and offier's rank. During his service, he received the Order of Glory, 1st Degree.

In 1952, Govorkov served as the First Chairman of the Poster Section of the Moscow Union of Artists. From 1946 to 1970, he worked at numerous Muscovite publishing houses, including the artists' collective Agitplakat that opened in 1956. Govorkov created a myriad of canonical Socialist Realist posters including, Here is Your Lamp, Comrade Engineer! (1933); Strike Work is a Matter of Honor (1934); I am Proud of my Son (1940); Field Work Cannot Wait! (1956); The Party Speaks the Language of Truth with the People (1967), and others. In 1971, Govorkov was awarded a title of "Honored Artist of the Russian Soviet Federative Republic". 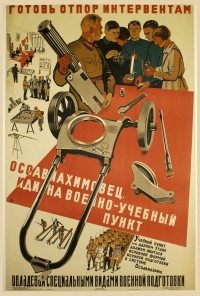 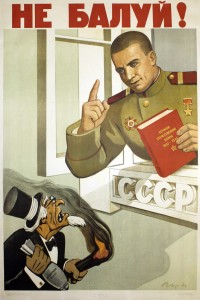 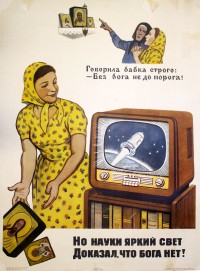 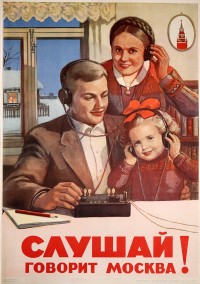